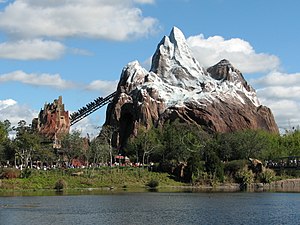 The man was named Jeffery Reed and had 44 years. He lived in a community called Navarre, in Florida.

He was not awake when the ride ended and was then taken to a hospital using an ambulance, where the doctors said that he was dead. It did not look like Reed had injuries, and the police is checking if the man had any conditions that changed his health before he went on the ride, to see if the accident happened because of the roller coaster or because of a disease.

It was said that the ride, which started working in 2006, was working well when the accident happened.

The website of Walt Disney World says that people should be in good health if they want to ride the roller coaster and should not ride it if they have diseases.

Since 1989, 15 people have died while riding on rides at the amusement park. Many of them had diseases before the accidents.

Do you have an opinion about this news story? Write it!

Retrieved from "https://incubator.miraheze.org/w/index.php?title=Wn/simple/Man_dies_in_roller_coaster_at_Disney_World&oldid=4184"
Category:
Cookies help us deliver our services. By using our services, you agree to our use of cookies.